Trending Learn Strains Community Forum Brands Find a Store
0
In
Sign In Up
Up
Trending
Learn
Strains
Community Forum
Brands
Find a Store
Sign In
Sign Up
Profile
Refer a Friend
Messages
Sign Out
Useful Links
About Us
Terms & Conditions
Privacy Policy
Guidelines
FAQs
Contact Us
Disclaimer
Notifications
Mark all as read
You have no new notifications.
See all notifications
Start a Conversation
Review for
Start a Conversation
Rating
Title
Description
0/1000
Upload Images
0/5
Submit
Review for
Search for
Start a Conversation
Start a Conversation
Title
Description
0/1000
Upload Images
0/5
Submit
Create a Business
Create a Business
All manually added Locations are sent to the tolktalk Moderator for approval. We need to confirm the information before we publish your Post. Thank you!
Submit
Create a Strain
Create a Poll
Create a Poll
Create
Share via email

Allkush, 2nd prize winner at the 2005 Highlife Cannabis Cup, is a hashy Kush blend bred by Paradise Seeds of Amsterdam. This resinous flower hails from the -Hippie Trail- that winds through Pakistan and Afghanistan, creating a 75/25-indica-dominant strain that soothes without binding the consumer to the couch. With traditional uplifting cerebral elements and a pleasant sedation on the body, Allkush shines on patients seeking relief from sleep disorders, anxiety, and depression.-

Blue Wreck, also called Blueberry Trainwreck, is a hybrid strain primarily led by its sativa influence. A cross between Blueberry and Trainwreck, Blue Wreck's flavor is a complex mix of sweet berry, sour fruit, and tangy skunk. Its effects are typically described as clear-headed and active, with a burst of calm euphoria that can help you maintain a positive outlook throughout the day.

Blush by Gastown is a balanced hybrid strain with uplifting cerebral effects and relaxing physical attributes. This strain tends to symptoms of depression by elevating the consumer's mood with an intense, smile-inducing euphoria. This smiley head-high slowly dissolves into the body, saddling the limbs with a calming weight that allows the consumer to relax and relinquish stressful thoughts. Enjoy Blush near the end of the day to maximize its stress relieving qualities. - -

Brandywine by Dungeons Vault Genetics is a pleasant indica strain with a calming buzz. Created by crossing Pink Champagne and Grandpa's Breath, Brandywine emits a delicate tea aroma with notes of hops and Chardonnay grapes. The effects are reminiscent of Granddaddy Purple, with relaxing physical attributes that dismiss stress without being overly sedative. Anticipate squinted eyes and a touch of appetite stimulation as well. Enjoy this strain in smaller, controlled doses to maximize its medical benefits. Brandywine won 1st Place Indica at the 2017 Dope Awards in Seattle, WA.-

Chong Star, named in honor of Tommy Chong, is a hybrid strain that is cultivated and sold by Marisol Therapeutics in Pueblo, Colorado.

Fortune Cookies is a hybrid cannabis strain that combines the famed genetics of Girl Scout Cookies and OG Kush in a potent mix of earthy, honeyed flavors. OG Kush genes are already present in Girl Scout Cookies, but Fortune Cookies has pronounced characteristics that OG fans will appreciate. Sativa genetics usually lead the way with Fortune Cookies, inducing a soaring, long-lasting buzz perfect for creative escapes. This hybrid can hit hard in larger doses, pushing past the confines of a subtle buzz into the weighty -couch-lock- effects typically associated with indica strains.- 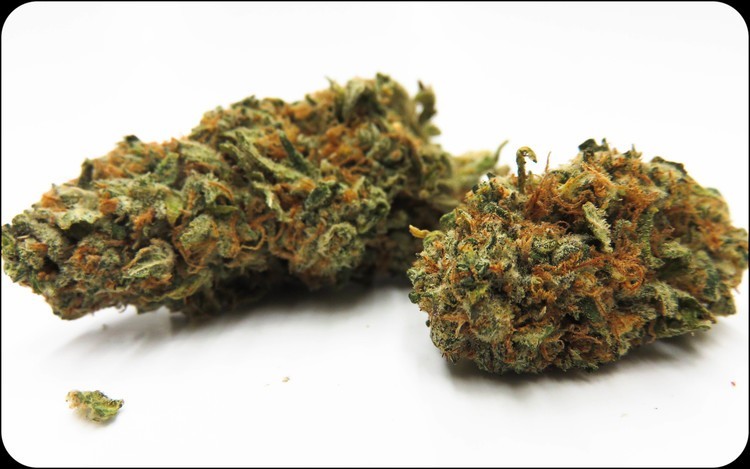 Four Way is a sticky genetic foursome of landrace genetics and Skunk #1. Created through the union of three Middle Eastern landrace strains (Afghani, Indian, and Pakistani) plus the addition of the classic Skunk #1, you best believe Four Way produces an odor that could tip an elephant, much less fill the room it's being consumed in. Known for an average cannabinoid profile of between 15-20% THC and 2% CBD, Four Way manages a creeping sedative bent that permeates the skin with warm, weighted sensations that guide you toward sleep. Four Way's old world terpene profile reeks of hashy spice, earth, pepper, and skunk. --

The celebrated breeder Subcool is well-known for his fondness of Brothers Grimm genetics, having used several of their strains in his breeding projects. As a thank you for championing their genetics while they were on a long hiatus from the seed business, the now active Brothers Grimm named a special hybrid after his seed company TGA (The Green Avengers). After finding a special male in a pack of TGA's Vortex, they decided to cross it with their Genius, one of the most sought after Apollo 11 phenotypes. The result is Green Avenger, a squat, branchy plant with long, sticky colas of tropical, fruity smelling flowers. With notes of pineapple and citrus, Green Avenger delivers a speedy, euphoric rush.

Honey Bananas from Elemental Seeds is a heavy-handed hybrid strain bred from Strawberry Banana and Honey Boo Boo. This cannabis strain earns its name with a resinous coat as sticky as honey and an unmistakable banana aroma. She leans heavily toward the indica side of the family, providing weighty full-body effects coupled with an invigorating buzz of cerebral euphoria. 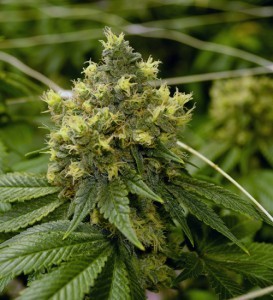 This hybrid from The Bank Cannabis Genetics is a cross between the sativa-dominant Snowcap and indica-dominant LA Confidential. There isn't a lot of -information available on Mammoth, but the breeder suggests that growers should look for phenotypes featuring the enormous yields of Snowcap, the shorter flowering time and manageable height of LA Confidential, and the dense buds, high potency, resin production, and disease-resistance of both parents.

Comedian Margaret Cho makes her move into the cannabis game with Margaret Cho-G, a cut of the famous OG Kush available in Bay Area, California. Sweet lemon, woody pine, and sour diesel flavors lead you into Margaret Cho-G's powerfully tranquilizing effects that any OG Kush enthusiast will appreciate. Pairing this strain with some stand-up is a surefire recipe for laughing fits, giving this hybrid even more reason to be dubbed -Margaret Cho-G.-

Master Skunk by Mr. Nice Seeds is an indica-dominant hybrid that crosses Master Kush with Skunk #1. With an aroma both sweet and earthy like its Master Kush parent, Master Skunk induces heavy relaxation throughout the mind and body. This strain is recommended for late-night consumption and for patients treating sharp or chronic pain. Master Skunk plants are resilient and mold-resistant with a flowering time of 7 to 9-weeks, making this hybrid a great choice for growers learning the horticultural ropes.

Mossimo OG is an indica strain that compaeted in the 2014 L.A. Cannabis Cup.

Robert Plant is the heady, stimulating virtuoso brought to life by crossing Blue Dream and Rebel God Smoke. This creative and drastically energetic strain combines Blue Dream's hazy, uplifted mental energy and Rebel God Smoke's full-throttle stimulation to bring about motivation and creativity. Respect the potency of this strain, as even pro-level consumers can experience a racing heart. This strain wad crafted by Colorado Seed Inc.--

Secret Garden OG is a Colorado Seed Inc. masterpiece. This OG strain is incredibly relaxing and dedicated to Kush fans everywhere. The blend of Lavender parentage against a Ghost OG Moonshine x Rug Burn OG foretells the weight this strain applies to muscles throughout the body. With a unique aroma that leans toward the therapeutic, Secret Garden OG offers a cozy sense of well-being that extends to mood elevation and pain relief. - -

Super Sweet is an indica-dominant hybrid strain that was bred in Flint, Michigan by Masterpiece Medical Group. This decades old heirloom strain entices the senses with a floral candy-like aroma and a frosty layer of crystal resin that blankets tight, dense buds. With a modest THC content that typically measures around 13-14%, Super Sweet is a good choice for novice consumers or those looking for a less intoxicating buzz. Its mellow euphoria resonates cerebrally while long-lasting relaxation takes over mind and body.-

White Kush is the dreamy daughter of Afghan Kush and White Widow. A powerful indica, this strain will put you to sleep in a hurry. Taking after its kush heritage, White Kush features a strong and incredibly pungent aroma and is the perfect strain for relaxation and stress relief, great for winding down at the end of the day. Typically flowering between 8-10 weeks, this strain is good for both indoor and outdoor cultivation.