American Kush, by Alphakronik Genes (AKG), is a 70/30 indica-dominant combination of Pre-98 Bubba Kush and Sin City Kush.-It is a robust strain with large bulbous colas that deliver the profound, relaxing body effects that have made Kush strains so popular. With a smooth palate of flavors ranging from fresh lemon to spicy notes of lavender and coffee, American Kush is a delightful answer to muscle spasms, chronic pain, and nausea.

Anubis by Pyramid Seeds is the indica-dominant cross of Somango and Wembley. This strain has been known to produce THC levels around 18% with touches of CBD and CBN that make this strain relaxing without being overly sedating. Anubis has a sweet aroma and a flavor some might describe as grapefruit or citrus peel, as well as calming physical effects that creep across the limbs. While growing, this plant remains short and squat, making it ideal for indoor or low-profile growers. This indica has a 56 to 63 day flowering time.

Bango is a hybrid strain with a rich terpene profile and tropical flavors worth sharing. This hybrid is a combination of White Fire Alien OG and Mango Kush, exhibiting subtle hints of each on the nose and palate. With sweet, fruity flavors of mango, banana, and pine, and an aroma with sweet floral notes and citrus peel, Bango offers an enchanting bouquet that will linger in the air. Bango's effects are equal parts cerebral and stimulating, and is certain to get you talking. This strain is preferred for mood elevation, appetite stimulation, and nullifying depression.-

Blackberry Lime Haze is a 90% sativa cross between Blackberry and Lime Haze that induces high-energy, clear-headed effects. Sweet lime and peppery spice overlay a subtle mix of honey, berry, and floral notes in a show of Blackberry Lime Haze's rich terpene profile. Functional creativity coupled with a happy mood make this strain conducive to productive afternoons or an active weekend with friends. Blackberry Lime Haze is a potent medicine for a variety of ailments, some of which include depression, headaches, fibromyalgia, spinal cord injury, multiple sclerosis, fatigue, pain, and spasms. Despite its sativa-leaning genetics, Blackberry Lime Haze grows into dense, chunky buds with a heavy coat of crystal trichomes. Though similar to Blackberry Haze, this phenotype leans more toward its Lime Haze parent in appearance and aroma. 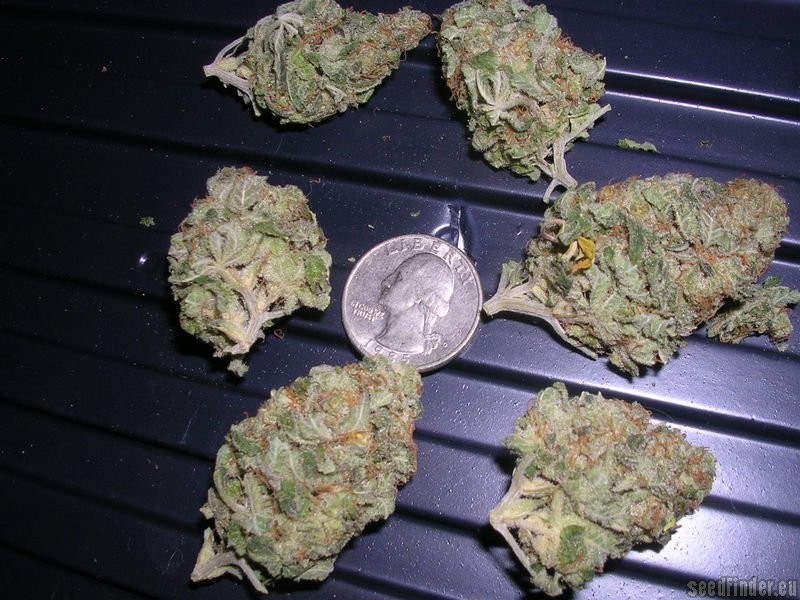 An indica-leaning cross between Cotton Candy and Shiskaberry, C4 is known for its high yields and resin production that make it an excellent option for producing top-notch concentrates. The fruity aroma is highlighted by a thick, earthy tones that mixes with flavors of pine and citrus. Its deep, relaxing effects are recommended to those battling depression and anxiety, and are sure to blow you out of any funk you may find yourself in.

Chernobyl is a sativa-dominant hybrid strain that carries-a unique lime-sherbet smell. Originally bred by TGA Genetics, this citrusy strain descends from Trainwreck, Jack the Ripper,-and Trinity.-Expect dreamy, long-lasting cerebral effects that will-float you to a happy mood and relaxed mindsets.-

Disney Blue is a mood-lifting hybrid strain appropriately named after the -happiest place on earth.- Bred in Temecula, CA by Greenleaf Genetics Collective, Disney Blue inherits the sweet aroma of DJ Short Blueberry and the blissful, uplifting effects of a Blue Dream parent sourced from Oaksterdam University. With an intensely flavorful burst of fruit and-blueberry, this hybrid awakens happiness in the mind and tranquility throughout the body.

Edelweiss (literally *noble white') was named after the famous white flower that grows in the high Swiss Alps. Both plants share qualities such as the star-shaped leaflets around the flower-tops and the thick white coating on the-leaves. Made from a blend of Hindu Kush, North Indian and Skunk, this is a mostly indica hybrid with just enough sativa background to perk up the powerful stone.

Extreme OG, bred by Exotic Genetix, is a potent yet functional indica built from the genetics of Fire OG and Green Ribbon. While Fire OG maintains chunky, weighted body effects, this strain stays uplifted thanks to the dominant Green Crack genetics inside Green Ribbon. In small doses, this strain places pleasant relaxation in the body while leaving the mind alert. But be warned, continuous consumption compounds this strain's indica effects, leading to couch lock and appetite ignition. ---

Frosted Freak is a Michigan hybrid that crosses Brand X with a long-lost sativa-dominant strain known as High Roller. She gets her name from the thick dusting of crystal resin that blankets its dense sage buds. With a citrus and piney mint flavor, Frosted Freak delivers potent effects that relax muscles, encourage the appetite, and calm nerves.

G13 Widow is a mix of two of the most renowned strains from across the cannabis landscape. G13, whose legend started in the US, combines with the prized White Widow, first bred in the Netherlands. The aroma of this intricate hybrid is sweet and tropical with notes of overripe fruit. G13 Widow is known to express itself as sativa- or indica-dominant depending on which of the many phenotypes it displays. The influence of G13 brings out medical strength, euphoric body effects, while White Widow brings a more uplifted, cerebral buzz. Medical patients note G13 Widow's ability to fend off body pains and also its impact on stomach issues and appetite stimulation.

GI001 is a sativa-dominant cannabis strain developed by one of Growth Industries' botanists. This strain is characterized by a lime green plant color, citrus taste, and high yields during cultivation. With little to no psychoactive effects, GI001 is a great alternative for those who don't want their medication to interfere with daily activities. Through Growth Industries' medical grade, standardized cultivation policies and procedures, GI001 boasts a CBD to THC ratio of 24:1 on a consistent basis. -Currently, Growth Industries' strains are only available through authorized vendors and pharmaceutical raw material outlets.

Gold King's Thai (also known as Gold King's Thai Stick) is the historical seed stock from a 1979 Thai Stick mother gathered by Gold King. This heirloom lineage is a special and rare cut that grows tight, colorful buds contrary to the traditional lanky stocks of Southeast Asia. During maturation, the plant's trichome dusted foliage transitions to a light amber/gold, contrasting against the purple and red hues of its leaves. The aroma is floral and tropical without being overpowering. Gold King's Thai has an extended 9 to 11 week flowering cycle, but is well worth the wait for classic strain hunters. -

Golden Nugget by Greenpoint Seeds is a cross of Stardawg and Golden Goat. The strain is emerald green with bright pistils and has a tart, sweet terpene profile intermixed with a tropical fruit and spice. Golden Nugget's robust body buzz sticks to the bones, assisting consumers with stress and fatigue. Utilize this strain throughout the day to elevate mood and spur creativity.-

Green Line OG by Cresco Labs is the offspring of Lime Skunk and Ghost OG. Notes of sweet citrus and forest floor fill the nose with a refreshing aroma. Inheriting both the uplifting nature of its Lime Skunk father and the potency of its Ghost OG mother, Green Line OG delivers equal parts mental clarity and physical comfort, offering consumers mood elevation while curbing aches and pain. --

What do you get when you cross two of the most potent equatorial sativa strains and plant them in the volcanic soil of paradise? You get Hawaiian Mayan Gold by Pua Mana 1st Hawaiian Pakalolo Seed Bank. This cross of Kona Gold and Colombian Mojito landraces produces massive sativa spears that reach for the sky. Growers take note, this strain can be difficult to tame without the proper vertical real estate. Hawaiian Mayan Gold's stimulating energy, long-lasting effects, and tropical terpene profile make it an instant classic right out of the jar. - --

Jamaican Dream is a 90% sativa bred by Eva Seeds using Jamaican genetics. A subtle and sweet flavor carries you through to an elevated mood and weightless euphoria. The effects are light enough to start your day with, making this strain ideal for early treatment of depression and fatigue. Jamaican Dream's pointed, compact buds will finish their flowering cycle after 42 to 45 days indoors, or at the end of September in outdoor gardens.

Jamaican Lion is a high-CBD sativa strain with mildly psychoactive effects that stimulate creativity and focus without the loss of functionality. Its rich genetic background combines Mountain Lion -- a Rock Bud and Lionheart cross -- with a Jamaican sativa known as Yarders. Shadrock, Jamaican Lion's creator, first brought the strain to California in 2007, where it was distributed to patients by Harborside. Ushered in by a sweet herbal aroma, Jamaican Lion induces mild psychoactivity that carries through despite its low THC content. Sensory perception sharpens as bad moods dull in clear-headed sensations that can be described as simultaneously uplifting and calming. Few strains compare to Jamaican Lion as it eases pain, anxiety, and inflammation without intoxication or mental cloudiness. Its CBD content is highest around week 9 of flowering, but if you're looking for more of a 1:1 ratio of CBD and THC, Shadrock recommends harvesting at week 8 instead.-

Key Lime Pie from Burning Bush Nurseries is a gourmet phenotype of the superstar strain Girl Scout Cookies. Selected for its strong indica characteristics and heavy resin production, this dynamic hybrid boasts flavors of lime candy, mint, and spice that spark flavors of earth and chocolate when activated by heat. The buds of Key Lime Pie regularly show traces of purple hues due to the plant's affinity towards colder temperatures. The bold indica influence produces relaxing body effects that help to relieve chronic pain and insomnia, but have been known to overwhelm those less familiar with cannabis.

Lee Roy by Rare Dankness Seeds is a connoisseur-grade sativa-dominant strain with incredible trichome production. Created by blending Triangle Kush with Rare Dankness #2, Lee Roy offers a Kush-forward aroma intermixed with lemon and lime. The plants prefer cooler temperatures and the yield is healthy if not generous. Utilize Lee Roy to contend with ADD/ADHD, depression, gastrointestinal disorders, and nausea. Rare Dankness Seeds also noted that this resinous strain is well-suited for hash production. -

Lemon Bananas is a hybrid strain that achieved fame in the 2015 SoCal Cannabis Cup when Dabblicious Extracts processed it into an extract worthy of 1st place in the Best Hybrid Concentrate category.

Lemon OG Haze by Nirvana is the sensible combination of its titular elements: Lemon OG and Haze. While Lemon OG contains weighty Kush elements that are kind on the body, the excess limonene and alpha-pinene lead the consumer into a state of mental alertness and euphoria. In the right measure, this strain can be a one-way ticket to productivity, hazing the mind into a content lull while wrapping the body in a calm focus. Enjoy this strain as a means to crush anxiety, depression, lethargy, and fatigue. --