Trending Learn Strains Community Forum Brands Find a Store
0
In
Sign In Up
Up
Trending
Learn
Strains
Community Forum
Brands
Find a Store
Sign In
Sign Up
Profile
Refer a Friend
Messages
Sign Out
Useful Links
About Us
Terms & Conditions
Privacy Policy
Guidelines
FAQs
Contact Us
Disclaimer
Notifications
Mark all as read
You have no new notifications.
See all notifications
Start a Conversation
Review for
Start a Conversation
Rating
Title
Description
0/1000
Upload Images
0/5
Submit
Review for
Search for
Start a Conversation
Start a Conversation
Title
Description
0/1000
Upload Images
0/5
Submit
Create a Business
Create a Business
All manually added Locations are sent to the tolktalk Moderator for approval. We need to confirm the information before we publish your Post. Thank you!
Submit
Create a Strain
Create a Poll
Create a Poll
Create
Share via email

Arjan's Ultra Haze #1 is a Dutch sativa bred by Green House Seeds, who combined Neville's Haze with landrace strains from Cambodia and Laos. With mellow effects that stay cerebrally centered, this strain is perfect for those seeking introspective, meditative moments or a light, active buzz. Four Cannabis Cup placements have won Arjan's Ultra Haze #1 a sterling reputation, but growers will have to wait with agonizing patience for its buds to finish their 13 weeks of flowering.

Banana Cream OG is grown by Vagrant Hill Farms of Forest Grove, Oregon. This strain is a hybrid cross of Blue Dream, Banana OG, and Ocean Beach OG. It emits strong notes of orange and spearmint, and expresses tight lime green buds. Not much more is known about this strain other than its heavy, OG-forward effects that lay into the body and gain weight with continued consumption.

Bear Dance is a sativa-dominant hybrid created by 303 Seeds. A cross between a Humboldt Snowcap mother (Humboldt Snow x Haze) and a Pure Kush x Uzbeki Hashplant father, this strain delivers a truly funky aroma and flavor that is dominated by lemon zest and herbal undertones. Bear Dance has a tendency to significantly stretch over its 9-11 week flowering period, so make sure you've got the canopy space.-

Colombian Mojito by Pua Mana 1st Hawaiian Pakalolo Seed Bank is a refreshing and potent phenotype of the legendary landrace, Colombian Gold. Originally grown in the Santa Marta mountains of Colombia, this -mojito cut- exhibits a tropical terpene profile while offering notes of mint and tart citrus that speak to its namesake. Sourced by Masta Cylinda, this sativa-dominant strain hits the consumer between the eyes, leading into a blissful, stoney mental state that lingers in the body for hours. Enjoy Colombian Mojito to improve mood and help abate stress. -- 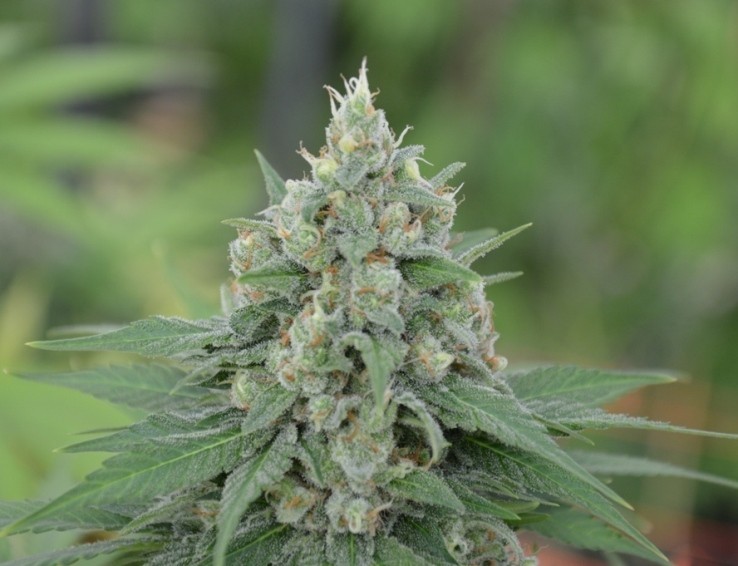 Double Mint by Natural Genetics Seeds is an indica-dominant cross of signature genetics. By pairing SinMint Cookies with Mint Chocolate Chip, NSG backcrosses Mint Chocolate Chip with its mother plant, reinforcing the sweet, minty terpenes of this strain's resinous, rock-like buds. Double Mint has a punctual 63-day flowering time and generous resin production, making it a perfect strain for extraction. Its sedative effects and mind-numbing euphoria make it an ideal -end of the day- strain to shrug off stress and be so chill, you're minty. -

Durga Mata, bred by Paradise Seeds, is an indica-driven strain. Despite being 90% indica, it acts unlike other predominately indica strains. With flavors best described as reminiscent of Turkish Delight, it offers a long-lasting relaxing body buzz without the couch potato effect. This strain has a natural resistance to pests and survives through rough treatment, which makes it a recommended choice for beginners and outdoor growers.

Bred by Pheno-Type Seeds,-Flowers For Algernon is a sativa-dominant cross between Sour Diesel and Mask. It inherits a strong tangy flavor with buds that grow dense like its Sour Diesel parent. 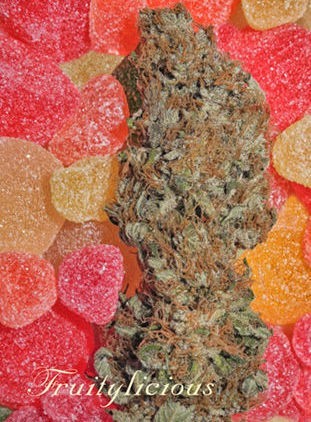 Fruitylicious is an indica-dominant hybrid bred by Mandala Seeds. Its fruit flavors are passed down from its parent strains, Blueberry and Very Berry Hashberry, and mix with subtle notes of hazelnut and pine. The effects of Fruitylicious are happy and uplifting with a burst of euphoria that helps keep a smile on your face during outdoor activities and creative endeavors.-

Sherbet by Gabriel Cannabis is a special cross of a Champagne mother and a flavorful Blackberry father. This classy union yields a phenomenal sherbet flavor intermixed with notes of mint and fresh berries. Gabriel's Sherbet is a gentle indica-leaning hybrid that mellows anxiety and stress while abating nausea and minor pain. This strain grows dense, multifaceted buds that express bright orange stigmas contrasted against purple and forest green foliage.--

Glass Apple is an award-winning strain from The Dandelion Co. out of Boulder, CO. This cross of Pineapple Express and Glass Slipper won Best Hybrid at the 2013 Rooster Classic. Having the aroma of freshly-cut Granny Smith apples and offering well-rounded sativa-dominant effects, Glass Apple firmly lands in a sweet spot for consumers seeking a functional buzz while boosting energy and cannabinoid intake.

Golden Tiger is a resinous flower created from two Thai strains and two separate Malawi cuts. Bred by Ace-Seeds, this pure sativa flower is a complex blend of Koh Chang Thai and Hmong Thai crossed with Malawi and 3rd Generation Malawi. This powerful sativa is not for beginners, as it offers long-lasting stimulating effects often with a potent psychedelic bent. With a terpene profile that is bright with notes of floral spice and tart lemon, its vigorous physical and mental effects make this a sativa of the highest caliber. This strain's long sativa lineage comes with a long 11 to 14 week flowering time.

Gorilla Cookies by Elev8 Seeds is the powerful union of Gorilla Glue #4 and Thin Mint Girl Scout Cookies. The pungent Gorilla Glue aroma is loud, but Thin Mint's exotic terpene profile adds nuance to the bouquet. Both parents were bred for potency and that shows in the resin-coated buds that harden like stones after curing. Enjoy this one-hitter quitter with care, as the effects will alter the trajectory of your entire day. Gorilla Cookies is a quality strain for managing physical pain, nausea, and stress.-

The celebrated breeder Subcool is well-known for his fondness of Brothers Grimm genetics, having used several of their strains in his breeding projects. As a thank you for championing their genetics while they were on a long hiatus from the seed business, the now active Brothers Grimm named a special hybrid after his seed company TGA (The Green Avengers). After finding a special male in a pack of TGA's Vortex, they decided to cross it with their Genius, one of the most sought after Apollo 11 phenotypes. The result is Green Avenger, a squat, branchy plant with long, sticky colas of tropical, fruity smelling flowers. With notes of pineapple and citrus, Green Avenger delivers a speedy, euphoric rush.

Hades Haze is a devilish bent on classic Haze genetics. Known for its rarity and indica-dominant nature, Hades Haze drops sedating weight on the consumer while still hazing the mind with a potent euphoria. Usually accompanied by a THC content of 20% or higher, Hades Haze's powerful euphoria gives way to creativity, laughter, and a lighthearted demeanor ideal for a night of movies and video games. Hades Haze exhibits its true indica nature with continued consumption, weighing on the limbs and eyes while encouraging rest and relaxation. Utilize Hades Haze to combat insomnia, anxiety, and pain. --

What do you get when you cross two of the most potent equatorial sativa strains and plant them in the volcanic soil of paradise? You get Hawaiian Mayan Gold by Pua Mana 1st Hawaiian Pakalolo Seed Bank. This cross of Kona Gold and Colombian Mojito landraces produces massive sativa spears that reach for the sky. Growers take note, this strain can be difficult to tame without the proper vertical real estate. Hawaiian Mayan Gold's stimulating energy, long-lasting effects, and tropical terpene profile make it an instant classic right out of the jar. - --

Heaven Scent is a hybrid cannabis strain bred by MTG Seeds that crosses genetics from God's Gift and Green Crack. The polar opposite effects of its indica and sativa parents meet halfway, delivering you to a balanced state of blissful, relaxed happiness. Its buds express themselves in hues that range from deep blue to dark purple.

Little Dragon offers a more citrus-forward Kush experience, blending OG Kush, Colombian, and Thai genetics. While OG Kush anchors the physical effects with mid-level pain relief and a general heaviness in the limbs, the Central American and Southeast Asian genetics explode on the palate and offer complementary mental stimulation. Enjoy Little Dragon as a functional analgesic strain that shows off its flavorful exotic roots on the exhale.

Created by GroundSwell Cannabis Boutique in Denver, CO at the request of world-renowned electronic/acid jazz musician DJ Logic, Logic Diesel is a cross between Mystic Kush and NYC Diesel. It has a sweet and sour, skunky diesel odor and flavors ranging from sweet sandalwood to spicy fuel. Logic Diesel will provide an intense, exciting sense of euphoria along with a mildly relaxing body high that is perfect for hitting the dance floor.

Mint Chocolate Chip is a rare cross of opposing genetics. Created from SinMint Cookies and Green Ribbon BX, this strange hybrid is mentally uplifting while remaining grounded in functional relaxation. The terpene profile is sweet, minty, and herbal, and the buds are dense with resin. Mint Chocolate Chip remains functional in-smaller doses, but shows its distracting and relaxing qualities with continued consumption. -- 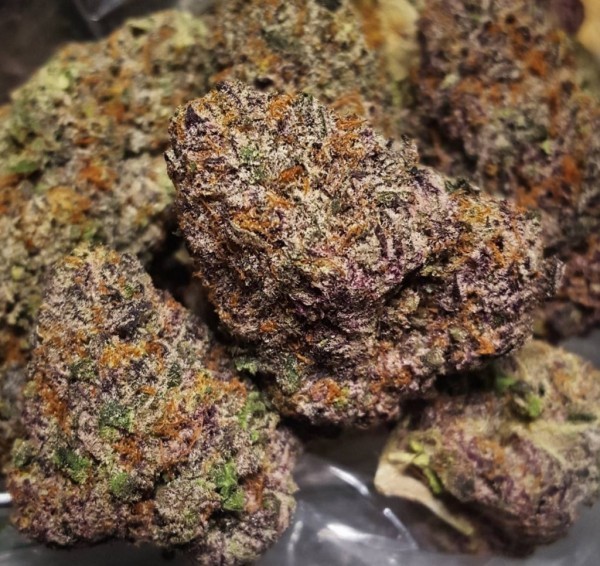 Mochi by Sherbinski is another strain that leans on the Cookie Fam lineage for flavor, potency, and stability. This phenotypic expression of Sunset Sherbet x Thin Mint Girl Scout Cookies is an indica-leaning hybrid with beautiful, dense buds. Mochi's appearance is a frosty mixture of purple and jade foliage knotted with bright red hairs. Its effects are very similar to that of its parent strains, offering moderate pain and stress reduction while imbuing the consumer with a calm and creative aura. The Mochi strain is also known by the names Gelato 47 and Mochi Gelato.-

Moon Cookies is a twice deep GSC x GSC cross that is certain to moon rock you! This intergalactic herb's stinky-sweet terpene profile is a complex melange of dough, earth, and green forest. The effects are those of classic Girl Scout Cookies, and the buds are resinous rocks that are hard and dense. Enjoy Moon Cookies into the afternoon as the physical effects of this strain can get heavier and more sedative with continued consumption. But in good measure, Moon Cookies offers a bright cerebral buzz that can improve mood while its physical effects mute minor physical discomfort, nausea, and stress. - --

Moonwalker Kush is a balanced indica-dominant hybrid that is the genetic cross of Triple OG and Tahoe Alien. This odoriferous combination speaks volumes through its scent, which is thick with soured earth and a hint of pepper on the finish. The herbaceous terpene profile aligns nicely with this strain's intense relaxation and moderate cerebral effects. Try Moonwalker Kush after dark to harness the sedative effects nestled below layers of trichomes and brown pistils. ---

Platinum Huckleberry Cookies by Dynasty Seeds is a labor of love that began in 2014. This strain crosses a potent Platinum Girl Scout Cookies mother plant and Dynasty's own Oregon Huckleberry father. The hybrid of these two strains offers growers higher yields, better internodal spacing, and a complexity of flavor few strains achieve. Its aroma is sour berries and mint while the flavor is hashy and floral. Platinum Huckleberry Cookies stimulates the mind with a rush of euphoria and crests into a full-body couchlock.